What lawn type is best for my client?

Clients often rely on your judgement when deciding on a lawn variety. Get it right and your client will have years of lawn bliss, but if you get it wrong it can reflect badly on your business. Too often Landscapers use the same lawn type for all projects. Is this really giving your client what they want or need in a home lawn? On large commercial projects the stakes are even higher, and choosing the right lawn that fits all aspects should not be a gamble. What are the aspects that determine which lawn to use, and which turf is the right choice given certain parameters? There is no such thing as a miracle grass that works everywhere, so choose wisely. 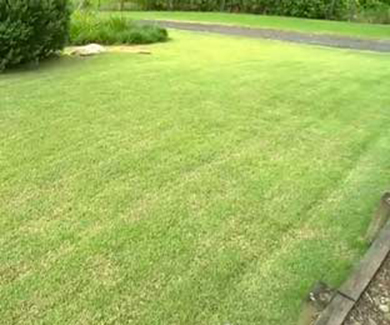 Looks: This may sound superficial, but one of the main reasons people buy a certain lawn type is for the look, and satisfaction of what they believe will be the best darkest green lawn in the street. Soft Leaf Buffalo, Kikuyu, and Zoysia all make great looking lawns with appropriate care, but Couch scalps very badly when mown with regular home lawn maintenance. So for much of the time it simply looks untidy, so for this reason alone, Couch can be usually taken off the list for home lawns, unless the client is a real lawn enthusiast.

For commercial sporting lawns Couch does have a lot to offer, but for parks and amenity areas, it is this scalping that really lets Couch down, plus the fact that it browns of so quickly in winter. Some people like very broad leaf turf, in that case the good Buffalo types work well, but if a fine leaf is desired then Zoysia and Kikuyu types are best, or as a compromise the finer leaf Buffalo Sapphire.

Up to 15% shade Kikuyu or Couch, or Blue Couch
Up to 40% shade Zoysia. Nara native turf or Empire Zoysia.

Up to 60% shade Palmetto, Sir Walter, and most other Buffalo types.

Winter Colour: In Western Sydney, Melbourne, Adelaide, Perth, and even inland Queensland; one of the biggest factors in choosing a lawn is winter colour. In this category, Kenda Kikuyu® wins hands down, but for shade and some other reasons, this turf will be ruled out for a number of situations, but ruled in for others. Palmetto Buffalo® is well known in the industry to have the best winter colour of the Buffalo types, and research backs this up.

Unfertilised the Kenda was the clear winner but still nowhere as good as the fertilised version, with the other types generally failing to impress without fertiliser. Fertilised in autumn only most of the Buffalo types looked good as well. So based on this research, it is so important to fertilise your lawn with slow release fertiliser in autumn and winter. In fact spring green up in this trial was very good for all grasses that were fertilised in winter with slow release. These days, most good lawn types have recipes for lawn care and fertilising recommendations on their websites.

Time of year for Installation: In spring, summer, and the first half of Autumn, all turf types will establish well. Except for the warm parts of Queensland or similar climates, the best winter establishing lawn is Kikuyu, with the most winter active being Kenda Kikuyu. Couch and Zoysia types are very slow to establish and are best not transplanted in Winter where possible. If they have to be, keep the couch well watered until it strikes which can take up to a couple of months. With Zoysia, it will not root out till the weather warms up, so either do not transplant it in winter, or top-dress it lightly, rubbing the mix into the grass so a third of the leaves are showing. In coastal Queensland and Northern NSW these turf types will establish adequately in winter. Buffalo types will establish slowly in winter in Sydney and Perth, but in Adelaide and Melbourne, topdressing is recommended, or better still waiting till spring, or choosing Kikuyu instead where possible.

Soil and Preparation: If the soil is poor and compacted, no turf will thrive. It is best to have a non-compactable rich in nutrient soil if possible, but sometimes that is not always easy to achieve. In Sandy Soils for home lawns, Zoysia types stand out as the best, followed by Buffalo, then Couch and Kikuyu. For sporting facilities where maintenances is good, and water is available, then couch and Kikuyu are often the best choices, but in a home lawn, unless well maintained, they rarely cut it. In colder regions such as Victoria, Kikuyu does perform well in sandy soils. In hard compacted clay soils, Kikuyu seems to do best, but that is only because it grows so fast. Buffalo and Zoysia also do well if they are treated at least 3 to 4 times per year with slow release fertiliser. Couch will need 5 applications per year to perform well in very poor soils.

Maintenance: If this is your client’s main concern, then Zoysia types are clearly the best choice. On average they need one third the mowing and edging of Kikuyu, and about half that of couch and Buffalo turf. Empire Zoysia, being the ultimate low nutrient lawn can prosper on just one fertiliser application of slow release each autumn. Buffalo is easier to edge than Kikuyu and Couch around gardens. If the site has lots of gardens, then Zoysia and Buffalo win hands down. Hint: If the grass grows into gardens, than Fusilade will kill the grass without hurting plants. Do not use on Poacea ornamental grasses, as it is a grass killer. Lomandra, Liriope, and Mondo are not grasses, so it will not hurt them. Read the label, and use where approved.

Dogs: Man’s best friend, and a lawn’s worst enemy. The fast growing Kenda Kikuyu is the clear winner here, unless it is a shady lawn. Kikuyu is what is used on race tracks. Only use Buffalo if it is shady, and then advise the client to give parts of the lawn a rest at times, particularly for medium to big dogs. Fertilise lots.

General Wear: All the lawns are good with general wear. Just fertilise well and regularly if wear is an issue.

Coastal: Nara Native Turf is the clear choice where lawns get bombarded by salt laden winds. Nara has 4 to 5 times the salt tolerance of most other lawns, and had the highest rating from the Department of Primary industries research of any lawn type discussed. If it is more than 40% shade use a Buffalo.

Weed Invasion and pests: Zoysia and Buffalo are the best at out competing weeds. Buffalo however is easily invaded with Kikuyu, and cannot be sprayed out. Zoysia can have Kikuyu taken out by a selective herbicide. Couch and Blue Couch are easily invaded by most weeds. If your client is in a region badly affected by Army Worm, then all lawns are susceptible, except Zoysia which has much more resistance.

Region and use: In Queensland and Northern NSW the clear star turf type is Zoysia, accept for shade where it is Buffalo. In the rest of Coastal Australia, Buffalo and Zoysia are neck and Neck, but Buffalo is still more popular mainly due to tradition, and the fact that it grows quicker for the turf farmer, so they are more inclined to grow it over Zoysia. In Melbourne and Adelaide, Kikuyu remains a strong contender though. In inland Australia, Kikuyu seems to rein supreme, due to its good recovery from drought. Couch and Kikuyu dominate sports turf, except in Coastal Queensland where high humidity damages Kikuyu, so Couch is king there. On the roadsides, Zoysia is now the lawn of choice, where it is usually only mown twice per year. In drainage channels, Zoysia copes by far the best with wet feet, and needs less mowing. 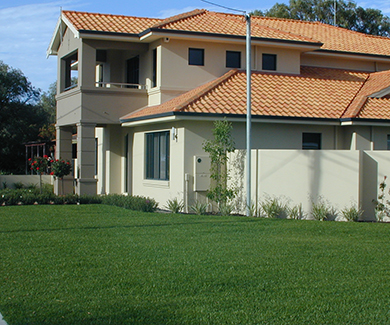 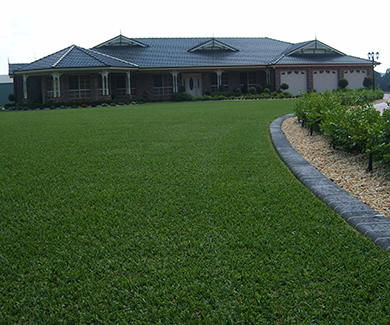 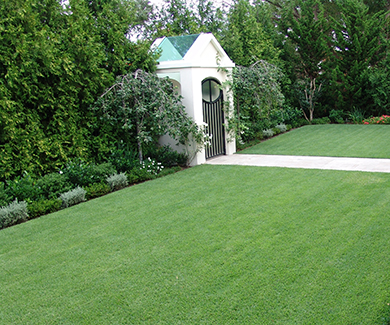