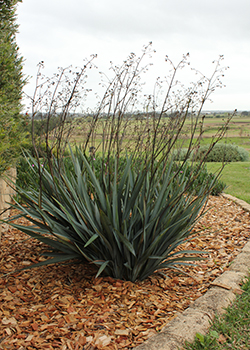 By Todd Layt and Kevin Handreck

This Summer I had the chance to visit many mass planting projects around Australia, and the main thing I noticed was that some ground cover mulch types worked far better than others. These observations reminded me of research conducted at Yates, showing which mulches were good, and which ones were actually harmful. Some mulch types were actually shown to reduce the amount of water available for plants. Gardening Australia, who originally reported this information, were nice enough to let us recreate their article in this magazine, which you will find below. But before you read this article, you may remember, back in I wrote an article called “The Good, the Bad and the Ugly of Mulch”. In this article I showed how mulch with a high percentage of fines in it was causing problems with mass planting. (Mulch with lots of small particles below 2 to 3 mm in size).

In this article I talked about how ground cover mulch with lots of fines, had many problems, including how it helped cause root rot disease in numerous plant types, particularly in more humid climates. Mulch with lots of fines really restricts air flow around the crown of the plants, allowing root rot to more easily develop; whist chunky mulch has better air filled porosity around the plant’s crown, which helps inhibit root rot. Mulch with fines also made it much easier for weeds to invade, than did course grade chunky mulch. Weed seeds germinate much easier in mulch with lots of fines, as it acts like a soil, rather than a weed inhibitor.

Mulch with fines furthermore erodes easier and poorly composted mulch with fines causes nitrogen draw down, stealing nutrients from the soil. One of the main points of the Landscape Manager article explained how mulch with fines made less water available to plants than compared to chunky mulch. The research outlined in the following article, kindly supplied by Gardening Australia Magazine from their December 2005 issue, written by Kevin Handrick and taken from research conducted by Yates further proves the point that chunky type mulches make more water available for plants.