Where to Buy Online

Dianella grass plants or flax lilies are a large family of strappy leaved plants found throughout the Asia Pacific region.

Many varieties are native to Australia and their attractive blue green leaves and deep blue to purple coloured berries make them firm favourites with home gardeners and landscaping professionals alike.

The large number of cultivars offers gardeners a wide range of strikingly colourful variations and their clumping form makes Dianella an ideal choice for mass plantings.

The richly-hued blue flowers with delicate yellow anthers perch like chandeliers on the end of wiry stems and contrast well with the long linear form of the leathery leaves.

Dianella is named after Diana the Greek goddess of hunting and this perhaps reflects something of the rugged beauty expected of Greek goddesses.

Living up to the expectations of society can be difficult for your average god or goddess but the leathery leaved Dianella is one little beauty that really delivers.

Which Dianella Plant Variety Is Best For My Needs?

The motto, ‘right plant, right place’ is firmly embedded in the Ozbreed philosophy.

We strive to source, breed and trial the ideal plants and cultivars for your particular needs. With at least 15 varieties of Dianella, gardeners have plenty of choice.

Dianella, also known as blueberry lily, blue flax lily or black anther flax lily, is native to Australia and many of the garden cultivars stem from four of the native strains: Dianella caerulea, Dianella revoluta, Dianella prunina, and Dianella tasmanica.

The Dianella Caerulea (Paroo lily) is found throughout Tasmania, Victoria, NSW, and Queensland. Some of the caerulea varieties, such as Little Jess™, are more resistant to cold, wet and humid conditions than others in the dianella range.

Ozbreed stock a range of caerulea varieties including:

Breeze® is fast growing. And its short flower canes mean you don’t get the tall dead flower canes that can be messy and detract from the beauty of other dianella varieties.

King Alfred® is a superb choice for erosion control. Research shows that King Alfred® can strengthen the soil by as much as 752%. 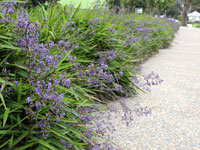 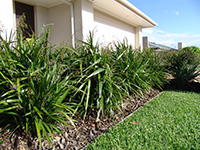 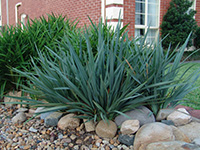 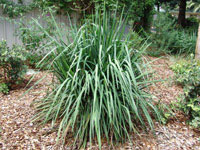 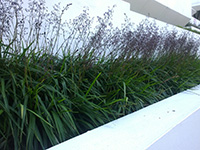 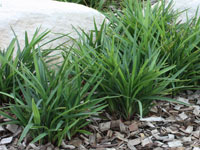 The Dianella Tasmanica (Tasman flax lily) grows naturally in the forests of Tasmania, Victoria and the NSW coast.

It’s tolerance for shade, moisture, and cooler temperatures make it a great choice for those wetter cooler locations that don’t suit some of the other dianellas.

Tasmanica also tends to be highly salt tolerant making it a great choice in many coastal locations.

Check out the wonderful leaf colours on the tasmanica varieties: 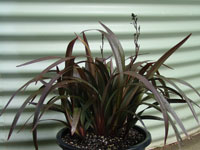 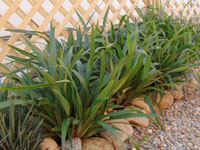 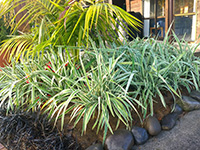 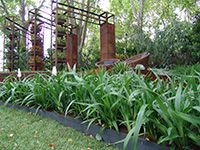 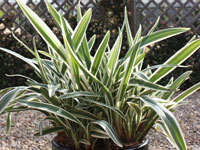 The Dianella Revoluta (‘blue flax-lily’ or ‘blueberry lily) is widely distributed throughout the country. Revolute refers to the rolled back curl on the leaves.

Ozbreed are proud to have produced a number of the most popular revoluta cultivars:

Revelation® is perfectly happy in dry conditions but is also one of the few dianella varieties that cope well with occasional wet feet. Revelation® grows to about 50cm by 50 cms and is good for erosion control.

Little Rev™ boasts a compact form (30-40cm high by 30 to 40cms wide) with highly attractive blue grey foliage that is perfect for accents and contrast plantings. 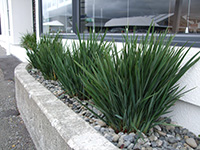 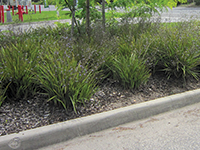 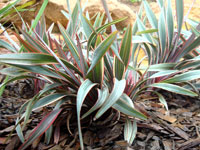 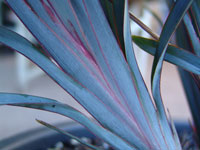 Where Should I Plant My Dianella?

Dianellas are generally a hardy drought-resistant group of plants that will tolerate a range of situations from full sun to shade. These perennial herbs will also cope with mild frosts, salt laden air, and a range of soil types.

They are low maintenance and are a great way to prevent the weeds from taking over.

Thanks to their rhizome type ‘runner’ root system you can quickly fill up large areas with colourful dianellas. They will spread naturally to colonise other areas or you can quite safely divide the rhizomes to produce new plants.

Dianellas are rugged and are a good choice for forming a clear demarcation boundary especially in those areas where people may trample on them (yes, you know, where your children take a shortcut to the house).

The dianella varieties provide strong leaf shape and work well to accent areas such as rockeries or against walls and fence lines.

These characteristics also make them ideal for use in commercial situations such as beautifying car parks.

Dianella is ideal for:

The leaves in some of the varieties grow as long as 750mm to 950mm so you should allow for this when you’re planting dianellas next to pathways. Having leaves sprawl across your path is not only inconvenient and messy but the tough leaves can be a dangerous tripping hazard.

Space the plants according to the growth habit of your particular variety.

But if you are using dianella as an accent plant (for example, to provide contrast in a rockery) you may want to think about giving them more space to highlight that contrast of texture and colour. On the other hand, if you’re using them for borders, pack them in tighter.

Most dianellas don’t cope very well with wet feet so plant them in elevated areas with good soil drainage.

Dianella is a rugged plant that copes well in a wide range of soils from sandy loam to clay. The main requirement for happy dianella plants is adequate drainage.

From time to time clean out old flower stems and dead leaves to increase air flow around the plant and reduce the chances of mould or disease.

Pruning every two to three years will encourage a tidier fuller form. Cutting back helps to prolong the life of the plant as well.

As the plants grow, runners will send up new plants. If you carefully uncover the rhizomes you can separate these colonies to form new plants. It’s a great way to populate your garden with these beautiful plants.

Are The Fruits Edible?

For hundreds of years the fruits of some of the Dianella family, particularly D. caerulea and revoluta species, are said to be edible when ripe. Some experts describe the berries as sweet or even grape-like with a nutty aftertaste and slightly gritty texture. The native birds love them too.

However, it always pays to exercise caution and limit your intake. And even if you never taste one the fruit’s beautiful appearance is an absolute delight and food for the soul. It is known that Dianella tasmanica and Dianella intermedia are known to be toxic and should not be consumed. The berries of Dianella caerulea are still widely perceived as edible, it is important to know you have the right species of Dianella.

What Problems Should I Look Out For?

Dianella is a pretty tough hardy plant that will thrive despite drought, heat, and shade but there are a few issues you should be on the lookout for.

This is a biggie for most dianella varieties. They really need good drainage and in most parts of the country will survive on natural rainfall alone.

If the planned planting area is naturally too damp you might be able to get around it by mounding up the soil and adding some coarser material to increase drainage.

A new form of Gall midge was recently discovered in Australia. Named, Resseliella xanthorrhoeae Kolesik, the larvae of this midge (like other gall midges) feed voraciously on dianella causing significant foliage damage.

Although an infestation is not usually fatal to the plant the damage is unsightly.

Unfortunately, most pesticides are not very effective in dealing with gall midge larvae infestations. Regular inspections and the immediate removal and destruction of infected plant material is probably the most effective method of control.

The fungus Uredo dianellae may sometimes appear on Dianella leaves and cause the orange rust spotting that gives this disease its name. Remove infected leaves immediately and dispose of them carefully.

Clearing our mould promoting leaf litter and exposing your plants to more sunlight and air are the most effective long-term remedies.