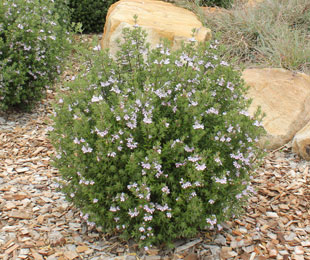 Ozbreed Aussie Box® Westringia is a tough, native alternative to exotic box plants such as English Box and Japanese Box. It produces mauve coloured flowers throughout spring and summer, with a dense growth habit. It was selected for its tight, compact growth habit and ability to grow and be clipped as a box hedge or low formal hedge. It can also be left without pruning, because it has a natural ball shape.

It is much more drought tolerant than exotic box plants, but it will need slightly more pruning to keep in a box shape. When pruned, Ozbreed Aussie Box® Westringia will reach 40-60cm high x 40-60cm wide; it grows 70-95cm high x 60-70cm wide unpruned. NOTE: it can grow up to 50% larger in good free draining soils in QLD and Northern NSW, pruning is recommended in these areas.

Uses
Great for hedges, borders and mass plantings. Will also
be successful in containers and general landscape.

Can tolerate heavy frosts and will work in Sydney and central NSW. Southern NSW, ACT, VIC & TAS. Also does well in coastal areas of Queensland and Northern NSW and is great for the heat of WA and SA.

Care
Can be pruned into a box, hedge or left in its natural ball shape, whilst staying compact and tidy. Compared to other Westringias, Ozbreed Aussie Box® Westringia requires much less pruning. Water well until established.

<< Back to Ozbreed Aussie Box™ Westringia