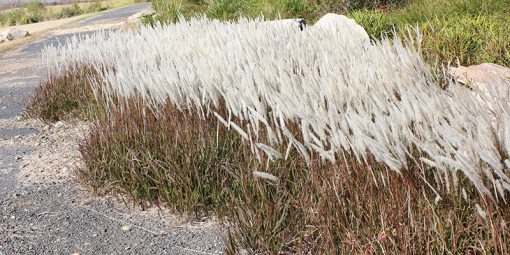 Add Some Flair To Your Design With Yalba

YALBA is an extremely tough and extremely beautiful Australian native, ornamental grass. Who ever thought a grass could look this glamorous? These fluffy plumes show for up to 5 months at a time (usually April to August) and are an eye catching feature for any landscape, and don’t forget that this plant is tougher than the fluffiness lets on. Another great feature is the reddish foliage in autumn and winter, with green foliage in the warmer months. Yalba is a dense, fast spreading grass and is much more compact than common Imperata grasses, with longer lasting and more prolific flowers.

Yalba is the perfect plant for roadsides, median strips and large landscape areas as it will out-compete weeds, has excellent drought and frost tolerance, and tolerates poor soils. Yalba is so competitive in an area that it out-competes Couch, Kikuyu, and most other weeds. Once established, you just mow it once each year or two, and that’s it. If any plant could ever be called bullet proof, then Yalba is it. Yalba is also perfect for slopes and erosion control as it strengthens the soil 5.45 times compared to bare soil.

With roadsides becoming difficult to maintain, a plant like this that can be mown any time of the year is just what the doctor ordered. Slash yearly, or every second year, and that’s it! Yalba will do the rest (avoid summer slashing if the region is in drought). Although if you want the masses of white plumes you will need to trim, slash or mow yearly around late February or March.

Where not to use Yalba:

Yalba grows approx. 50cm-60cm high with a spread of 60cm to 100cm or more. It prefers full sun to part shade and tolerates sandy to heavy clay soils.