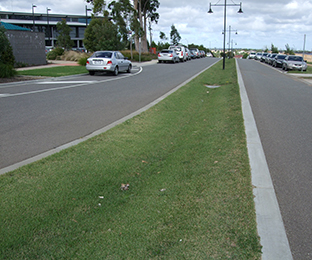 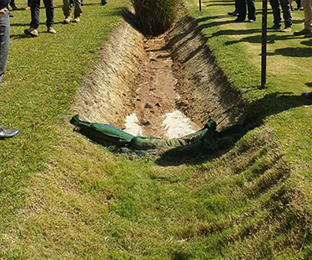 Turf is the best choice for erosion control 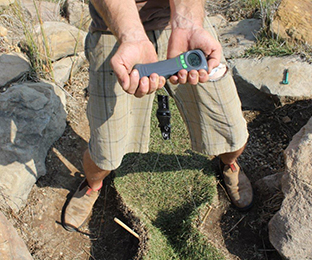 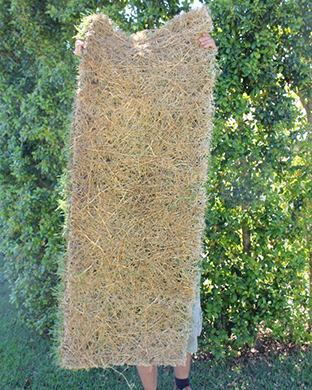 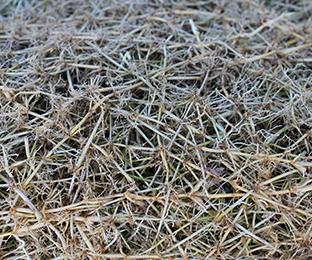 Close up of Nara™ Native Turf

Turf has shown in research to be the safest and most reliable method of achieving full green life coverage on erodible surfaces, and amazingly is one of the lowest cost alternatives. It has achieved far more reliable coverage than hydro mulching, and when worked out on percentage of coverage, turf was a surprisingly economic solution. In a side by side study, Hydro mulch achieved a 23% coverage, whilst turf had 100%. Turf performed far better than silt fences, biodegradable mats, hydro mulching, and erosion coir socks. This issue with turf was that it required mowing at least 5-8 times per year on a traditional drainage swale using traditional varieties such as Couch or Kikuyu.

Enter the Zoysia revolution. About 10 years ago the roads department started to experiment with Empire™ Zoysia japonica ‘SS500’ PBR turf on roadsides and drainage swales. After years of trialing, since about 2010, Empire™ Zoysia has been the go to turf for many roads departments for non-irrigated areas on roadsides, and as a result the maintenance savings have been huge. On average Empire™ turf is being mown twice per year. When it reaches approximately 12-15cm it is mown. Empire™ Zoysia will stop growing much beyond 20cm, so on slopes and drainage channels where that height is acceptable, the turf can be mown or brush cut every couple of years or not at all if the area is not meant for walking on. In research, after no mowing for 8 months Zoysia reached 127mm in height, whilst Couch reached 250mm and Kikuyu reached 422mm in height. Zoysia does well in low nutrient situations allowing it to work well without fertiliser.

Since 2011 lots of people have used a native version of Zoysia called Nara™ Native Turf. It has the same benefits of Empire™ Zoysia such as low maintenance, but has better winter colour, is more salt tolerant, and best of all is native. Zoysia macrantha only occurs in Australia, so it cannot be mixed up with exotic turf types. Like all Zoysia, Nara™ copes really well with wet feet, so it is ideal for drainage swales. If water sits on Zoysia for a week it will not be adversely effected like Couch, Kikuyu or Buffalo would be. Turf farmers often keep their wet areas to grow Zoysia.

Research has shown Nara™ strengthens the soil 105 kPa or 58%, which is far higher than Couch at 68.1 kPa and Kikuyu at 72.4 kPa. In fact both Nara™ and Empire™ have a natural mesh growth inside them. They have extremely strong stolons and Rhizomes, these form a natural mesh that greatly increases the turf rolls tensile strength making it the perfect solution for pegging with specialised biodegradable anchor type pegs. Pegs such as E staples have been designed with a type of arrow head that makes them very hard to pull out. If water tries to remove turf such as Couch or Kikuyu, these pegs will stay in place and the turf will rip through the pegs; they hold that well. But with Zoysia, the pegs will fail first, it is that strong. If Zoysia is used for erosion control, it is like having very strong jute mesh grown into the turf.

In the past, the cost of maintenance has been a barrier for erosion control professionals and engineers not to use turf. The mowing costs were just too high. But now with Zoysia, to keep a drainage swale looking great, two mows per year are all it takes. To keep it looking acceptable as a grass area that can be walked on, one mow or brush cut per year is all that is needed. On slopes or areas where pedestrian traffic is not a problem, a brush cut every 2-3 years will keep it looking satisfactory. If tidiness is not a major factor, then no mowing at all will still provide erosion protection.

Both Empire™ Zoysia and Nara™ Zoysia are superb at outcompeting weeds. They get thick enough that weeds find it difficult to survive. They have both proven to be extremely drought tolerant in research, and will live on natural rainfall in the Eastern states of Australia once established.

Installing reinforced turf is low cost and simple. Firstly lay the reinforcement on the ground on large sections, then peg it down so it will not lift if people walk on it. Lay the turf rolls going with the flow, length ways. Peg two pegs at the beginning of each roll (flow side), then use one peg in the middle and one at the far end. Use biodegradable pegs that grip, such as E staples. If the flow is less than 2 metres per second, netting underneath the turf is not required. The lowest cost and most effective netting has shown to be knitted bird net, which is widely used in fruit groves to stop birds, and is relatively inexpensive. After a few short weeks the turf will have grown into the netting, providing a low cost, very low maintenance, Zoysia erosion control solution that can withstand long duration flows of over 5 metres per second.

Unlike concrete and other hard surfaces, a Zoysia lined channel or slope will help remove heavy metals and nutrients, catch sediment, and return water to the water table, where as hard armour simply transfers pollutants to final destination. Normal Zoysia turf or site reinforced Zoysia provide instant erosion protection, with 100% success if water for establishment. Whereas temporary mats or hydro mulch that are seeded have a much lower success rate, as the vegetation needs to grow from seed or plants, and then cover the ground, this will happen over a much longer period and often only works haphazardly.

What do you use though if the bottom of the channel is always or almost always wet? Dryarna is the answer, it is a form of native turf commonly called Water Couch. It will survive in permanently wet conditions even if water flows along it. However, it is not that drought tolerant, so it is best used at the bottom of the swale where it is regularly wet. In dry situations, such as the sides of channels or if the bottom is only periodically wet and has periods of dry, it is better to use Nara™ native turf.

Average cost including installation according to Landscape Association and other research.

The Zoysia revolution is now upon us. It has been tested and proven to work for over 10 years in Australia. In the Southern USA it is far more main stream, as they started decades before us. The greatest barrier to using turf for erosion control, on roadsides, on slopes and in swales was the cost of maintenance. Zoysia has solved that problem, and as a bonus is the strongest, best performing erosion control grass, having higher shear strength and an ability to better protect the ground from high velocity water.