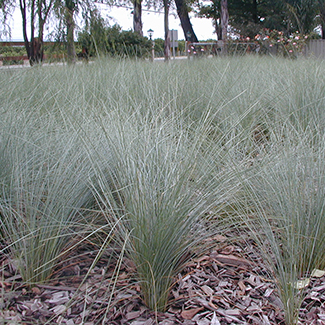 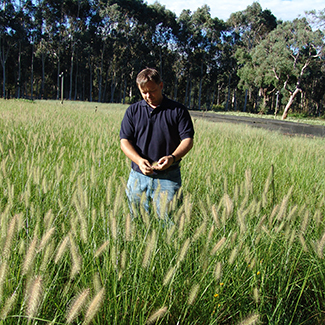 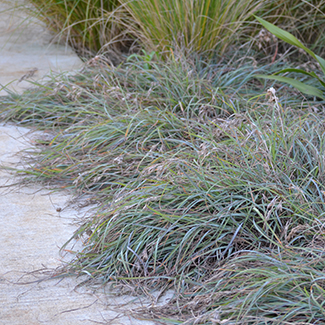 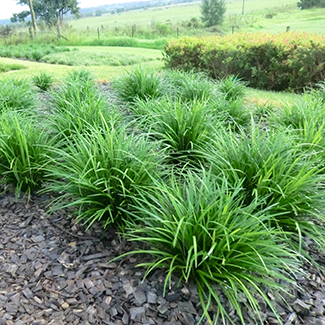 True ornamental grasses of the Poacea family have the distinct advantage of establishing very quickly. In 2 seasons, or half a year of growth they look like they have been established for years compared to regular plants. Plant cool season ornamental grasses like Poa in autumn, and by spring they are well established, although they also do well if planted in Spring. Poa Eskdale is still popular today due to its ability to grow cleaner, and cope better with Sydney’s summers.

Kingsdale™ Poa has very blue fine foliage, and looks great next to green plants. It is very tolerant of salt laden winds. Poa are still very popular in Victoria. The best time to cut back cool season grasses in Australia is autumn. Warm season true ornamental grasses if planted in spring will look mature and amazing in the first autumn. Native Pennnisetum are still very popular due to their beautiful autumn plumes. Australian Pennnisetum alopecuroides differ greatly to what is grown overseas.

Australian forms are more tolerant of the heat and drought than the types that originated from overseas, but are not as cold tolerant. Nafray for example thrives in Australian conditions, even in Canberra, but when it was taken to the USA it would not cope with the Transition zone’s cold, which is somewhat colder than Canberra, yet the forms grown in the USA which had their roots in breeding in the USA and Europe, from plants from the Asian continent, easily survived the cold of the USA.

Australian forms are more tolerant of the heat and drought than the types that originated from overseas, but are not as cold tolerant. Nafray® Pennisetum for example thrives in Australian conditions, even in Canberra, but when it was taken to the USA it would not cope with the Transition zone’s cold, which is somewhat colder than Canberra, yet the forms grown in the USA which had their roots in breeding in the USA and Europe, from plants from the Asian continent, easily survived the cold of the USA.

These same types however really struggle with Australian summers. Nafray® Pennisetum is still very popular in Aussie Landscapes due to its quick establishment, and its reliability. Many projects from 15 years ago are still healthily populated with Nafray®. Another true Australian native grass to stand the test of time is Mingo, which is a compact blue foliage Kangaroo grass. This makes a stunning reliable blue ground cover that also looks great cascading over rocks. The best time to cut back warm season ornamental grasses is spring.

True ornamental grasses require cutting back annually to look their best. On large scale plantings this is extra work, but it does quickly and efficiently clean the landscape, and promote clean new growth.

In gardens, the fresh look of recently invigorated grasses can be the highlight of a garden. Ornamental native grasses are very tough, drought, heat and frost tolerant, and Pennisetumn and Kangaroo grass are very humidity tolerant. They are long lived if the minimum care of the annual cut back is observed. With their strong root system they are great at preventing erosion, and help clean stormwater runoff by removing nutrients and heavy metals, and few pests or diseases bother them.

These grasses move interestingly in the wind and create a living hypnotic sound as they rustle, attract wildlife, and add a natural soft look to any garden, providing interesting textures and colours, with changing appearances throughout the year. They make great companions for potted flowers, perennials, herbs, shrubs, ground covers and succulents and look great when planted in and amongst rock. Attractive, elegant, colourful, soft, flowing, feathery, graceful, gentle, freshening and breathtaking are ways of labelling ornamental grasses.

Strappy leaf plants took over in popularity from true grasses in the early 2000’s. This is whenTanika® Lomandra took the position of Australia’s favourite grass like plant.

Its clean green fine leaf evergreen foliage ticked a lot of boxes, and it only needed trimming every 4 to 6 years which saved greatly on maintenance costs. Today Tanika® Lomandra is still the number one selling Landscape plant in Australia. Nyalla® Lomandra has a slightly more upright blue grey fine foliage that is highly tolerant of salt laden winds, making it the perfect coastal ornamental grass like plant. More recent breeding has resulted in Lomandra types that not only handle drought, but also wet feet, which was for years the nemesis of Lomandra.

Katie Belles™ Lomandra hystrix is a taller grass like plant that is often used in retention basins, and rain gardens Australia wide, and is used as the go to Lomandra for Queensland where the humidity makes it hard for Lomandra longifolia types. Tropic Cascade™ Lomandra is a more compact weeping form that looks great in gardens, and is very shade tolerant. For years Queensland was in need of a fine leaf Lomandra that survived its humidity. Many had come to try, but all failed till the introduction of Shara™ Lomandra. This compact fine leaf Lomandra thrived in Queensland, and has performed really well in rain gardens around Australia. It is moreover very cold tolerant so it has worked well as an evergreen alternative to poa in the cooler climatic zones.

Exotic grasses have never been as popular in Australia as they have been overseas, but Liriope, a grass like plant continues to grow in use. Evergreen Giant has been popular in Australia for decades, unfortunately the nursery industry started to grow it from seed, and the true type has all but disappeared from sale in Australia, leaving poorly performing Liriopes in its place. Liriope evergreen Giant in South Africa for example is completely different to what is now grown in Australia. They are still growing the original plant from division and not the poor performing seed grown clones that now are used in Australia.

Just Right® Liriope is now replacing Evergreen Giant as the only Liriope that thrives in the heat, drought and full Australian sun. Just Right® Liriope has a leaf thickness (not width) double that of Evergreen Giant. It is also a little smaller. The ridged leaf keep it from burning in the full sun. All Liriopes thrive in the shade, but some do well in full sun in the Eastern states, if they are cut back annually. Just Right® Liriope does not need to be cut back however, as it stays evergreen and clean for many years before it needs a trim. However if other Liriope are mown or cut back hard at the end of winter, they perform well in the full sun. The yearly cut back removes any dead foliage, and the Liriope quickly reshoot in Spring and looking great.

Liriope makes a great ground cover and is very reliable. Amethyst™ Liriope has purple flowers that sit high above the dark green foliage. Pink Pearl™ Liriope is a variegated form with beautiful pink flowers. Silverlawn™ Liriope is a new white and green foliage Liriope that is ideal for colour contrast in the garden. Isabella® Liriope is a lawn alternative that needs mowing every August, and make a lawn in heavy shade areas like down the side of a house.

While Lomandra and Liriope continue to grow in popularity, the Australian Native ornamental grass has not been forgotten, with large numbers of Poa, Pennisetumn, and Themeda still being used in the Landscape today.