In the seventies, eighties, nineties, and the first part of the Naughties, amenity planting often used the same type of plants over and over again, mainly because they worked, and were no fuss. Now many of the same plants are being used over and over again, but in very different forms. Plant breeding has made these plants more visually appealing, better performing, and less maintenance, and in the case of exotics, far less invasive. There are a few new species that have emerged, but in the main amenity planting is now the realm of reinvented versions of the older forms.

Amenity areas are often non-irrigated, and receive far less care compared to residential gardens. Even if an irrigation system is installed, they occasionally break down, so drought tuff plants are needed. They are also highly visible to the public, resulting in designers and Landscape architects using mainly evergreen plants that look good 365 days of the year. 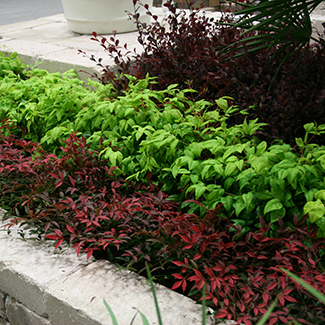 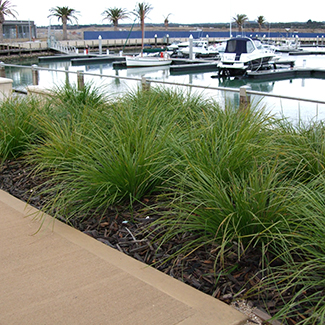 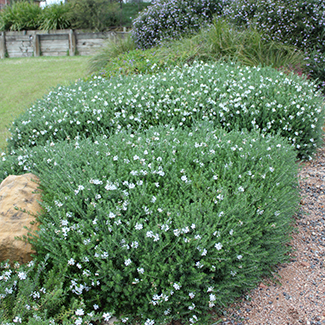 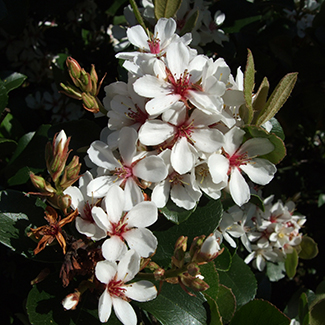 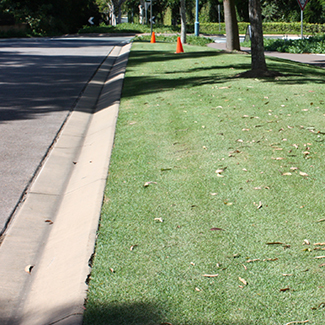 Nandina is a perfect example of this. In the past it was Nandina domestica nana that was all the rage, planted in parks, around offices, and off course in McDonald’s car parks. Nandina are still very popular in amenity areas, but now the older Nana type is being replaced by far nicer alternatives. Gulf Stream and Moon Bay have become very popular because their finer leaf and more tidy habit are far superior to domestica nana. Right now we are seeing a new revolution in Nandina. All these past types were mainly grown for their late autumn and winter red colour.

Lomandra longifolia and Lomandra hystrix have been used for decades in large numbers for amenity planting. The advent of Tanika™ lomandra revolutionised the use of this plant. Its fine dark green leaf, tidy habit, soft non spiky nature and super drought tolerance has made it the biggest selling amenity plant in Australia. Lomandra confertifolia became popular for a while, but the fact that they mainly live in shaded forest, saw them fail time and time again in large amenity plantings.

They also hated wet feet, and recent wet periods caused those lots of problems. Shara™Lomandra fluviatilis ‘ABU7’ PBR, which is actually one of the new species is now widely being used in amenity areas, including rain gardens. It handles drought, frost, wet feet, and has an even finer leaf compared to Tanika™ lomandra. It is the first fine leaf Lomandra to do well in Queensland, but it is just as happy in Canberra. A third smaller than Tanika™ lomandra, makes it well suited to amenity areas that need a smaller plant.

Westringia in the past was widely used, and still is, but there was a move away from it for a while, as most plants did not cope well with clay soils, had too much die back, and were too short lived.

Mundi™ Westringia, a low growing ground cover, and the miniature Grey Box™ Westringia are now used widely in amenity planting. These guys handle periodic wet feet in clay soils, and are longer lived. Callistemon have always been popular, but some of the past popular types like the shorter lived Kings Park Special and Captain Cook are now being used less often.

Some popular plants from the past like Little John continue to flourish. Great plants will always be wanted. There are now new forms of this available, including the myrtle rust resistant Green John™ Callistemon. Myrtle rust has certainly changed amenity planting in some parts, with councils looking for disease resistant varieties such as Slim™ Callistemon, a narrow screening shrub. Myrtle rust has all but seen the end of Agonis flexuous being used in amenity areas.

Liriope and Ophiopogon are still a mainstay in our landscape, and plants like Stripy white are selling more than ever. Evergreen Giant is still very popular, but unfortunately its days maybe numbered, as the true form of the past is now rarely sold. A decade or more ago, nurseries started selling seed grown versions, which has resulted in a highly variable plant now being supplied, with many projects failing. Just Right® Liriope, a hardier more sun resistant type has now started to take its place. Liriope are still used widely in full sun, but are regularly the go to plant for shaded amenity areas. Isabella® Liriope is widely being used as a lawn alternative for shade.

Hedging has remained popular, and many of the old favourites are still used. Murraya, Vibernum, Lilly Pilli, and Photinia are still very popular, with many types from the past still being grown. Murraya Min a Min is a more compact version, but buyers still seem to prefer the faster nature of the original.

Red Robin is the go to plant for Photinia, with its wonderful red new growth, and its ability to form a dense screen quickly it is no wonder.

The improved faster bushier nature of Super Red and Super Hedge from Paradise plants is resulting in them quickly catching Red Robin in popularity. Resilience is one of the popular Lilly Pillies, and more narrow sites has seen Pinnacle™ Syzygium become very popular. Due to drought, Buxus has lost its appeal in many regions. A finer leaf version of Vibernum, called Dense Fence™ Viburnum is now widely being used, but it still retains quick growth to form a screen.

Perceived Invasive plant lists have greatly reduced the popularity of many plants, including Agapanthus, Rhaphiolepis, Dietes, and Gazania are used a lot less compared to the past, but new breeding for low seed set or sterility is seeing these plants make a comeback. Agapanthus coped a lot of bad press in some regions, but faith is being restored with breeding for low seed set.

Agapanthus such as ‘Cloudy Days’ and Queen Mum™ Agapanthus are safer, and more beautiful with their part blue part white flower. Rhaphiolepis used to be installed frequently, but after it was added to lists its popularity plummeted.

Now Cosmic White™ Rhaphiolepis and Cosmic Pink™ Rhaphiolepis, with their lack of berries and seed, and their higher disease tolerance is seeing them come back with a vengeance.

Seeded Gazania is being used less and less due to invasiveness, but plant breeding by Sydney University and Nuflora has created a 100% sterile form. Double Gold™ Gazania ‘GT20’ PBR is not only completely non-invasive, it has more prolific beautiful flowers and a blue foliage.

One completely new genus and species to make a rapid rise in amenity areas is Zoysia turf. Roadsides, council parks, community areas, office and residential buildings are now using Zoysia due to its low maintenance.

On roadsides it only needs mowing twice per year, and in other fertilised areas a third the mowing of other popular amenity turf types. Empire™ Zoysia turf is the most popular type, thriving with very little fertiliser, but Nara™ Native turf is quickly gaining in popularity. This native turf has excellent winter colour, and thrives in our harsh Australian climate.

After analysing the amenity plant market, it was very interesting to note the species used has not changed much, but the varieties have changed greatly.