Australia is one of the hardest places on earth to successfully install green life in summer. Our heat is tough, but we are also an island nation, and the hot summer winds take their toll. Couple this with our naturally poor soils, our regions of hot and dry, or our other regions of hot and humid, really resilient plants and turf types are needed for summer installation. 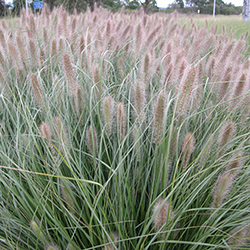 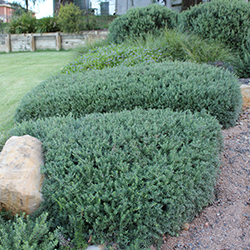 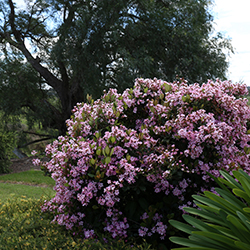 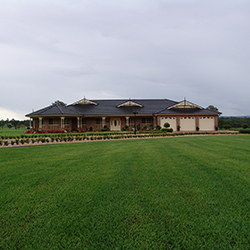 Lomandra have been one of the go to plants for summer success. In humid climates, the increase in root rot diseases has seen a need for resistance, particularly when planted in summer. In non humid regions, the added irrigation required in summer installation, makes summer disease resistance important.  The good news is that now there are a number of Lomandra types that cope with the summer heat, the irrigation, and the disease that summer throws at them. Shara™ Lomandra fluvialtilis ‘ABU7’ PBR and Evergreen Baby™ Lomandra labill. ‘LM600’ PBR are leading the charge. These more compact fine leaf varieties are the only fine leaf Lomandra that work in Queensland, and love summer planting, and most importantly periodic wet feet. In Sydney, where summer humidity kicks in, these are showing no problems with root rot disease. Even in Victoria, Adelaide, and Perth, Phytophthora is on the rise, and summer installation, coupled with frequent irrigation gives these plants the edge in summer planting. Other broader leaf Lomandra that love summer planting include Katie Belles™ Lomandra hystrix ‘LHBYF’ PBR, Tropic Cascade™ Lomandra hystrix ‘LHWP’ PBR, and Lucky Stripe™ Lomandra hystrix ‘LMV200’ PBR.

Plants and turf can sometimes be split into categories of plants that love summer, and plants that love the cooler months. With Grevillea, the warm climate types such as Superb, and Royal Rambler™ Grevillea hybrid ‘RR01’ PBR do well when planted in summer, whilst the cooler climate types such as Grevillea rosmarinifolia do better when planted in autumn to spring. Ornamental native grasses, show this really well. If it is summer, the warm season grasses do best, such as Nafray® Pennisetum alopecuroides ‘PA300’ PBR and Yalba™ Imperata cylindrica, whilst in cooler regions in winter, grasses such as Poa labillardieri ‘Eskdale’ and Kingsdale™ Poa poiformis ‘PP500’ PBR do well, but not so well if planted in summer. Dianella is so variable that some plants work well in summer planting, and others fail. Little Jess™ Dianella caerulea ‘DCMP01’ PBR and Lucia™ Dianella caerulea ‘DC101’ PBR are the Australia wide stars when it comes to summer planting, although in WA, and SA, Cassa Blue® Dianella caerulea ‘DBB03’ PBR is actually the summer star. All are caerulea types.  Again it is all down to heat and humidity levels. Whilst in cooler regions Dianella tasmanica types such as Tasred® Dianella tasmanica ‘TR20’ PBR or revolute types such as Little Rev™ Dianella revoluta ‘DR5000’ PBR do better in installation in autumn to spring.

Westringia perform well when planted in summer, but as with most plants, the ones that handle wet feet in summer do best. The only three westringia documented to handle periodic wet feet are Grey Box™ Westringia fruticosa ‘WES04’ PBR (2015 NGIA Plant of the Year), the ground cover Mundi™ Westringia fruticosa ‘WES05’ PBR, and the vivid flowering Blue Gem™ Westringia hybrid ‘WES03’ PBR. Callistemon generally do well in summer plantings, but some are better than others. Slim™ Callistemon viminalis ‘CV01’ PBR, Macarthur™ Callistemon viminalis ‘LC01’ PBR, and Green John™ Callistemon viminalis ‘LJ23’ PBR are the three best for this time of year and all do well in rain gardens. Quick establishing plants such as Yareena™ Myoporum parvifolium ‘PARV01’ PBR and Aussie Rambler™ Carpobrotus glaucescens ‘CAR10’ PBR, transplant well in summer, and quickly establish as ground covers that handle drought relatively early on.

There are a number of exotic plants that are real stars with summer planting, and are as tough as nails. Leading the charge are Rhaphiolepis plants such as Cosmic White™ Rhaphiolepis indica ‘RAPH01’ PBR, Cosmic Pink™ Rhaphiolepis indica ‘RAPH02’ PBR and Oriental Pearl, the only three exempt from the ban in parts of NSW, as they are female infertile. Summer finds it hard to kill these. Flat Mat™ Trachelospermum asiaticum ‘FT01’ PBR is a real summer lover, and a great ground cover solution. Nandina do well in summer provided the water is kept up, and there are now types that are red in summer, as their new growth is always red. The red nine months of the year Obsession™ Nandina domestica ‘SEIKA’ PBR is doing so well in summer plantings, that it is becoming hard to find, as the plants are getting used so often. Agapanthus have been known to be great summer lovers, with plants like Queen Mum™ Agapanthus orientalis ‘PMN06’ PBR showing such colourful blue and white bicolour flowers, and plants such as Baby Pete providing a smaller sized summer loving plant. Liriope has to be the ultimate summer installation plant, establishing quickly, loving wet feet, and handling the dry once established. Overwatering in summer is not an issue with these plants. The only true evergreen variety is Just Right® Liriope muscari ‘LIRJ’ PBR, staying far more evergreen in the summer heat, and the winter’s cold, due to its more robust leaf compared to Evergreen Giant. As ground cover types go, Silverlawn™ Liriope muscari ‘LIRSS’ PBR and Isabella® Liriope muscari ‘LIRF’ PBR are mow once per year lawn alternatives that simply love summer installation.

In Australia, we are spoilt for summer loving turf varieties. Turf is split into two categories. Warm season including Buffalo, Couch, Kikuyu, and Buffalo, and cool season including Fescue and Rye grass. Naturally the warm season types do well with summer installation. Some types such as Zoysia do better with summer planting than the rest of the year, as it establishes quickly at that time of year. Buffalo types that root out quickly after installation such as Sapphire® Stenotaphrum secundatum ‘B12’ PBR, are loved by Landscapers, due to their quick establishment. As long as you choose a warms season turf type to install in summer, and the turf is well watered in establishment, it is hard to go wrong.

So now you have a good list of summer loving plants to install, what other aspects can improve summer green life installation. In humid regions, reasonable drainage can help reduce summer disease stress, as too can the use of chunky mulch without fines. Mulch with lots of fines can become hydrophobic, and actually make planting in summer worse than not having mulch at all. Soils in general can become hydrophobic, so it is important to use a wetting agent regularly through the first summer if needed. If Phytophthora is an issue, using preventives in the first summer can be a great insurance policy. The best two preventative products can be used in unison. Phosacid used in conjunction with Phytoguard, have given good results in recent trials at Ozbreed’s research facilities. Applying these products at installation time, and then a follow up 4 weeks later, can greatly reduce the effects of this disease. It is often the first summer that causes problems with plants, so if you do not use root rot resistant plants, make sure you use this technique if you live in humid regions. Envy sprayed on the foliage of the plants, helps protect the leaves of plants in summer planting, and can even reduce wind damage. Tree Guards and wind breaks also help protect plants from wind damage. One of the biggest risks to summer installation of lawns is lawn grub. An outbreak can devastate a lawn. Acelepryn from Syngenta, can be sprayed on newly installed turf, it is safe, and can solve the January to early March lawn grub lucky dip. At this time of the year, army worm can move through suburbs, and can destroy new lawns. Every Landscaper should have Acelepryn as part of their tool kit, and the small expense is good insurance against lawn grub devastation on newly laid lawns in summer.