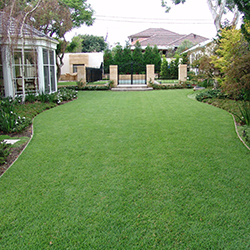 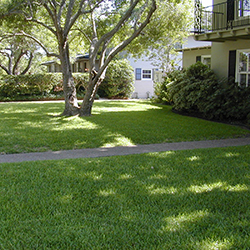 Recently, the results became available from some interesting turf research conducted by Ian Paananan from Nursery Crop and Services, and Henry Locock, a lawn maintenance operator. These trials were conducted on behalf of a large group of turf growers, and my company, Ozbreed Pty Ltd at Windsor NSW.

After about a year of fine tuning mower heights and frequencies, this trial showed that Couch and Kikuyu could not look reasonable unless they were frequently mown. It was further realised that they could not be allowed to grow tall, say to 90mm, and then mown short to say 50mm, without a major reduction in quality. Kikuyu and Couch looked unacceptable when mown under these frequencies. On the other hand Palmetto Buffalo, and 2 other Buffalo varieties, as well as Empire Zoysia could be mown with these infrequent mowing regimes, and still look presenable. Even in the first year, which was mainly a quality evaluation program, it was clear that Empire turf and Palmetto Buffalo needed a lot less mowing than Kikuyu. It was also clear that Buffalo and Empire could be left for much longer periods between mowing, than Kikuyu and couch turf. This is important for the lawn mowing contractor, as it allows them to take on more clients. It is summer that usually prevents the contractor from taking on any more clients than they can service in one week. If they had more customers with Empire Turf, and less mowing Buffalos like Palmetto, then they could take on many more clients.

In the second year, a regime of mowing was instigated, that would be the minimal amount to keep each variety looking good. Eg; Kikuyu and Couch was found to need mowing when it reached 70mm, and were mown to 50mm, whilst the Buffalo varieties, and Empire Turf were mown when they reached 90mm. The heights were checked on a weekly basis, and those plots that reached the right height were mown. Our first year research proved correct, as in the second year all plots remained in good condition. After spring and summer mowing frequencies were calculated, Empire
Turf was shown to need one third the mowing of Kikuyu, and half the mowing of couch. It also needed 30% less mowing than the average of the Buffalo varieties. Palmetto Buffalo also proved to require significantly less maintenance. Palmetto required half the mowing of Kikuyu, and 35% less mowing than couch, and up to 17% less mowing than its main rival soft leaf Buffalo.

These results show that if mowing is to be reduced, choose Empire turf, or at least Palmetto Buffalo. If four million homes around Australia chose to replace their more frequently mown lawn with Empire turf, then Carbon Monoxide emissions alone would be reduced by 235000 tonnes. Hydro Carbons would be reduced by 52000 tonnes. These figures were based on data from the EPA in the USA, and Australia’s Bureau of Statistics. Another way to reduce these emissions is for lawn mowers to be regulated based on emissions, like in Europe and the USA. So next time you buy a mower, think about getting one with a catalytic converter. This could save up to 60% in emissions. Try avoiding 2 stroke engines as these really add to emissions. Mower companies all over Australia are now offering a good choice in low emission mowers.

Studies have also shown that Empire Turf will look good with much less fertiliser. I suspect Buffalo would also require less fertiliser to look good compared to couch. As for irrigation, Empire and Couch varieties will survive drought the best, but Buffalo will require less water to keep it looking green. In general all warm season grasses have great abilities to handle drought, particularly compared to water hungry cool season grasses such as Fescues and Rye Grass. In fact a recent University of Western Sydney study showed that Warm climate turf is watered about the same as native gardens. Typical exotic gardens needed to use almost double the water compared to turf and native gardens.

In the research conducted at Windsor, it was also found that Couch in particular is very prone to weed invasion, and to a lessor extent so was Kikuyu. The Buffalo and Empire Turf required no chemical control to keep weeds out, they seemed to keep them out with their density. Thatch was another issue with some grasses. Kikuyu, Couch and Empire all seemed to be good at not thatching. In the Buffalo varieties, only Palmetto did not badly thatch. Palmetto also produced far less seed than the other varieties of Buffalo. The couch was found to regularly seed.

So for high maintenance sports areas, Couch or Kikuyu maybe ideal, but for lower maintenance amenity areas, the choice is clear. Empire Turf is the lowest maintenance lawn, followed in second place by Palmetto Buffalo. The other Buffalos still required a lot less maintenance than Couch and Kikuyu.

If you want to find easy to maintain plants, look to our roadsides and highways. Roads departments try to use only very low maintenance plants. It is hard for them to maintain these awkward to get to places, so the plants need to be very dense, to help stop weed invasion. They also need to be very drought tolerant, rarely need trimming, and rarely require fertiliser or any other chemical treatment.

Here are some of the most popular plants that rarely if ever need trimming, particularly in summer. New and old.

Dianella Little Jess – This Dianella caerulea is a low slowly spreading Dianella that reaches to only 40mm in height, and provides excellent erosion control. If planted densely, this plant really out competes weeds.

Callistemon Kings Park Special – Apart form being beautiful, this plant is tough and easy to maintain. Its density helps keep weeds at bay.

Lomandra Tanika – This Lomandra longifolia is popping up on roadsides on a regular basis. It is a low maintenance, stylish looking plant.

In tropical Queensland, humidity diseases often cause a problem. There are now two new Lomandra hystrix plants, well know to survive whatever Queensland throws at them. Tropic Cascade a compact form, and Katie Belles, a big flowered form are set to make low maintenance landscapes in Queensland much easier.

King Alfred – This blue toned foliage Dianella caerulea is one answer to low maintenance landscaping around Australia. This plant is amazing, in that its foliage generally remains clean and crisp, even when planted in poor conditions. Periodical wet feet, humidity, extreme cold, heat; nothing seems to upset this plant.

Nyalla looks like a grass tree without the trunk, but is a much easier to grow Lomandra longifolia. Planted on mass, this plant competes well with weeds, and will rarely if ever need trimming. 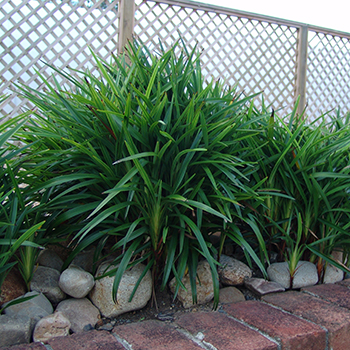 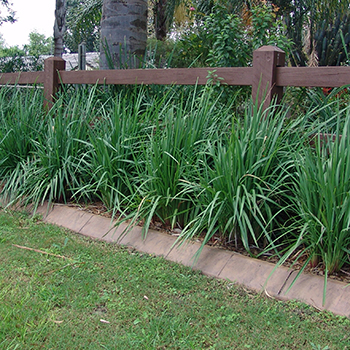 Weed suppression is probably the greatest contribution mulch has to offer low maintenance landscapes. Weed suppression and mulch is common sense. Soils, potting mix, and propagation mix germinate seeds, including weed seeds really well. Chunky gravel, chunky hardwood chip, makes it almost impossible for weed seeds to germinate. So why do we see so many landscapes using tub ground mulch with lots of fine grade soil like material. They should only be using chunky mulch with zero fines. The reason why, is that the cheap untreated or treated recycled mulch saves upfront costs. If however, the ongoing costs of weed removal are taken into account, the chunky mulch would look much more economical.

Rock can also be another good weed suppression tool. If rock is used, make sure plants similar to those above are used, as extremely heat tolerant plants are needed to cope with the extreme heat generated from the sun baking the rocks.