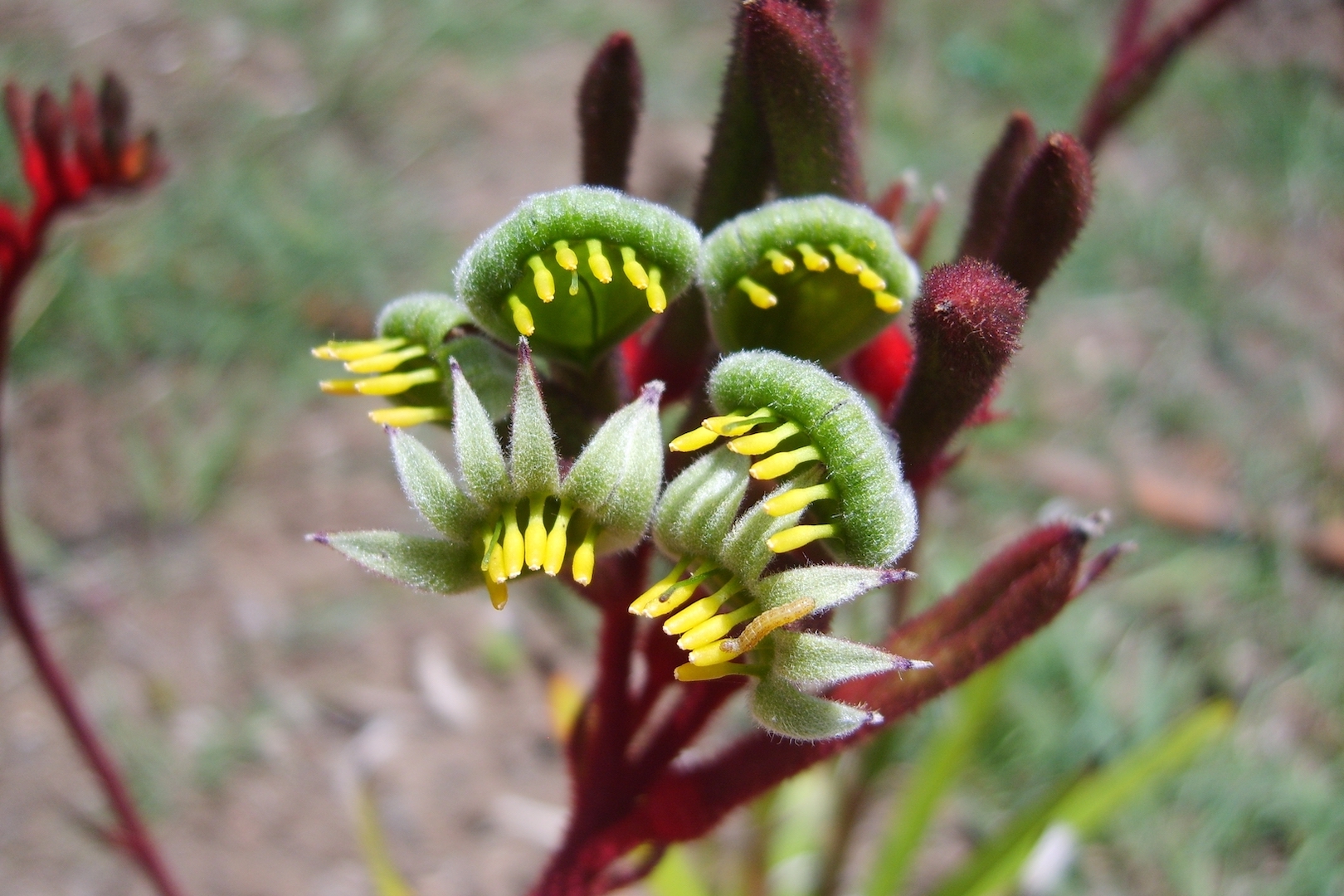 In the past breeders of Kangaroo Paws have bred very weak, disease prone, smaller, short lived Paws, but with highly beautiful flowers. In a break with tradition, George Lullfitz has released a range of Kangaroo Paws that have been bred for toughness, disease resistance, and longevity, yet still look remarkably good.

Breeders in the past have used short lived annual smaller Paws as the dominant gene base to breed smaller plants, ideal for pot culture, and have ignored Paws for landscaped gardens.

The plants are a little bigger, but still generally classed as mid sized, which is still somewhat smaller than the standard larger Anigozanthos flavidus types. Landscapers are now using the Velvet range in large landscape projects, and even in tough roadside applications.

The Velvet range of Kangaroo Paws look great in large Patio pots or planter boxes, providing in many cases almost year round showy flowers, with crisp clean foliage. Simply trim the older flowers, and if the foliage eventually becomes tired looking, simply cut back the plant hard, and it will reshoot.

This might need doing every few years or so. Another great thing about these plants is that they will provide a long term source of beautiful flowers for florist arrangements in the home.

Gold Velvet is my favourite. It has beautiful dark green foliage, with masses of showy bright yellow flowers. This plant is ideal for mass landscape planting as its foliage is the right size to compete with weeds. Its golden flowers are bold, substantial, prolific, and in my garden have flowered 18 months out of the last 24.

Regal Velvet seems slightly taller than the gold velvet. These two plants are so tough it is almost like growing Lomandras with magnificent flowers.

Amber Velvet’s flower is about the same size as gold Velvet, but its foliage is a little smaller. Vivid amber coloured flowers really set gardens alight with colour.

Ruby Velvet is the smallest of the four tough Kangaroo Paws. So this is the ideal one to have at the front of the garden, and it even makes a great garden border. In my garden Ruby Velvet has remarkably produced vivid ruby coloured flowers continuously for two years. Amazing!

Both these plants are better suited to gardens where weeds can be kept in check, as their smaller foliage will compete less with weeds, than the other two, but apart from trimming off older flowers occasionally they are really easy to look after.

These plants are amazing. Friends always comment on their colours, and beauty. So if you are looking for tough easy to care for plants, with amazing showy flowers, then these new tough Velvet Kangaroo Paws are your answer.

Gardening Hacks On A Tight Budget

Who says you can’t have a garden that’s both affordable and attractive? With a little…

Planting on a Slope

Don’t let a hilly area in your yard be left to waste. Due to difficulties…

How to Reduce Garden Weeds